The World at Her Feet

Playwright Stephen Gillard has been looking at how football was once branded ‘quite unsuitable for females’ – and the women in Lincoln who defied the ban.

They might have played in front of crowds of more than 50,000, but not everyone was happy about the rise in popularity of women’s football during the First World War.

Women’s football was already established before 1914 but it was during the war it really took off.

Men were sent to fight on the front line and back home women took on their jobs and their positions on the football pitch … and the public loved it.

In Lincoln, teams were formed from the factories where they were taking on traditional male roles previously considered too dangerous for women.

“During the First World War the women in the factories were encouraged to form football teams and sporting teams as a way of boosting morale, fitness and team work because the First World War was really the first time women got the chance to work for themselves,” explains Lincoln playwright Stephen Gillard, who is researching the team for a play titled The World at Her Feet to be performed in Lincoln over Armistice Week from November 11 this year.

“Here in Lincoln you had Ruston Aircraft Girls and Foster Tank Girls, all the factories had a football team.

“Then after the First World War from 1918 onwards those women here in Lincoln came together and formed Lincoln Ladies Football Team from a desire to keep that going.” 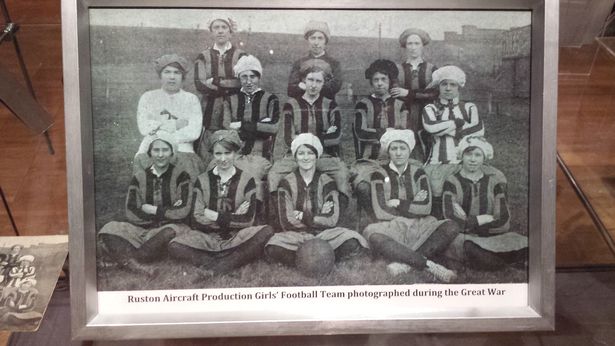 “They lost their jobs very quickly once the war finished, when the men returned and were given their jobs back, but the women didn’t want to lose what they had.

“Lincoln Ladies was formed and various others. There was still some that existed from before the war – Doncaster Belles for example had been a big team. They formed the first leagues. There were lots around.

Lincoln Ladies (sometimes referred to simply as Lincoln, and at other times the Lincoln Munition Girls) was so successful, Stephen has found evidence they were playing games at Sincil Bank. 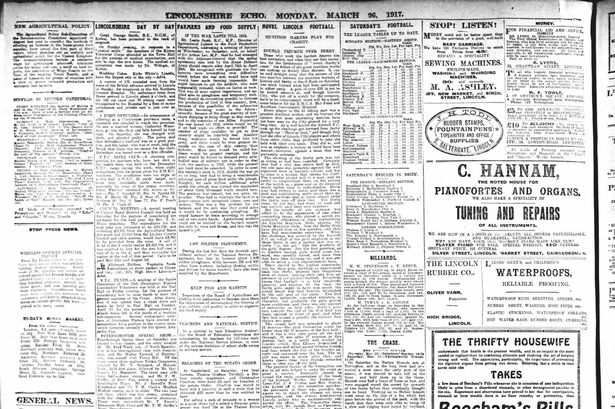 The Lincolnshire Echo from Monday, March 26; 1917 features a match report including a team from Lincoln Munition Girls playing the Derby Munition Girls.

“These women’s teams became incredibly popular. For Lincoln Ladies there is anecdotal evidence that they would have 10,000 come to watch them play.

“Preston had 50,000 watch them. Preston actually ended up getting invited across to America and played in front of an American crowd against men’s teams and beat some of them. So women’s football wasn’t just a side show it was the real deal.”

Dick, Kerr Ladies FC from Preston, founded in 1917, was one of the most famous of the time.

In 1920 a Boxing Day match against St Helen’s Ladies was watched by a crowd of 53,000 at Goodison Park with 10-14,000 outside trying to get in – it was a record turnout for a women’s match, and the record stood for 92 years. They were also the first women’s team to play in an organised match wearing shorts.

But women’s football was effectively banned when the FA called on its clubs to refuse the use of their grounds for women’s matches in 1921.

“Complaints have been made as to football being played by women, the Council feel impelled to express their strong opinion that the game of football is quite unsuitable for females and out [ought] not be encouraged. Complaints have also been made as to the conditions under which some of these matches have been arranged and played, and the appropriation of the receipts to other than charitable objects. The Council are further of opinion that an excessive proportion of the receipts are absorbed in expenses and an inadequate percentage devoted to charitable objects. For these reasons the Council request clubs belonging to the Association to refuse the use of their grounds for such matches.”

“It was only after the First World War when the FA wanted to re-establish the men’s game that they killed the women’s game dead in one day basically.”

Stephen’s research suggests there were several reasons for this, including wanting to clear the way for men’s football to rise in fame for financial reasons.

“The women’s game tended to be played for charitable purposes. Although the players were paid, a lot of the gate receipts would go to benevolent funds.

“After the First World War there was also a concerted effort to put women back into the home. Laws were made to give jobs back to men [the 1919 Restoration of Pre-War Practices Act ordered women to leave their wartime jobs for returning men].

“There was this sense that ‘right the war’s done, let’s get the women back into the home and let’s re-establish the world as we knew it before 1914’.”

“But the novelty of the occasion was added to by the appearance of two other contending teams, who played a match immediately afterwards – a team representing the Lincoln Munition Girls playing the Derby Munition Girls. Now the Derby Girls have played four or five matches, and thus have had considerable experience. When the challenge was accepted by the Aircraft FC on behalf the girls employed in the shops there, it was a matter that was entirely ‘in the air’.
“But the first question, as to whether enough girls would come forward was speedily resolved, and since then they have been training on, and it was possible to select a very representative team.
“There should be the highest commendation for these girls, talking on an experienced team like Derby, whereas they themselves were, of course, making their very first appearance in competitive football.
“The Derby girls ought to have won easily, the actual result was that Lincoln triumphed by the only goal of the game.
“The first half was, naturally, somewhat uncertain in character but gradually the girls gained more confidence, and there was any amount of enterprise on both sides. Derby’s pressure towards the end of the first half was finely resisted in front of goal, and when they had missed a penalty the visitors’ best chance was gone.
“The second half was extended to about 22 minutes – the girls themselves asked for longer than the 15 minutes of the first half – and it was a very open game all the way through. It was after 17 minutes in this portion that, in a really well worked up Lincoln attack, Miss Elleary dispatched a smart cross shot which passed between friends and foes, struck the foot of the further upright and cannoned over the line. The result was never in doubt after that.

“Of course, the suffragettes re-emerged after the war strengthened hugely and emboldened by an influx of millions of women who’d had their first taste of working freedom and weren’t really willing to just give that up.”

The ladies even took part in the English Ladies’ Football Association Cup in 1922, playing Boston in the first round draw (referred to simply as Lincoln).

“Lincoln Ladies compared to say Doncaster or Preston were not as established.

“There’s a lot of evidence and research that says women of the time would often, if they were relatively new teams, be playing in just their normal clothes.

“There’s a number of reports of a lot of snapped ankles for example from women who were playing in their high heels in the mud.

“A lot of them didn’t have proper kits or football boots, all this kind of stuff unless it was given to them. Some teams had things provided to them by men’s teams that were supportive of the women’s teams. Some had it from backers.

“We don’t know what Lincoln’s kit was exactly, but evidence suggests they were playing in a hodgepodge of whatever they could get their hands on.

“But they did keep playing, they didn’t stop.”

The British Ladies Football Club North Team, believed to be the first official women’s football team in the UK, were also the first women’s team to play at Sincil Bank in 1896

They played ‘Anywhere they could. In some ways that was the middle finger to the establishment’.

When Lincoln Ladies lost Sincil Bank, it was a case of playing wherever they could.

“We think it’s the rugby fields where they were allowed to play and practice.

“Teams that could survive tended to find places like testing fields. And the rugby fields. Anywhere they could.

“In some ways that was the middle finger to the establishment saying ‘you may take the grounds away but we are going to find a way to practice, we’ll play in the streets, we’ll play on rugby fields, we’ll play wherever we can – we just want to keep playing’.

“They kept going in one form or another all the way through to very recent times when they switched and became Notts County.”

Notts County Ladies were created in 2014 when the modern day Lincoln Ladies FC were controversially relocated from Lincoln but the club folded in 2017 because of debts. However, the club has been relaunched this May as Notts County Women.

It’s not overstating matters to say the ladies of 1918 trail blazed a path for the modern day female footballers to follow.

But it has taken one hundred years for the women’s game to start attracting the crowds of its forerunners, such was the damage done.

Despite their labours, Stephen says the history books have not paid tribute to Lincoln Ladies’ struggles.

“Mostly it’s the odd mention here, the odd bit here. This has been incredibly difficult to research.”

And that’s where Stephen is hoping you’ll be able to help.

Can you help? Lincoln playwright Stephen Gillard’s play, The World at Her Feet, is to be performed in Lincoln over Armistice Week from November 11 this year. Stephen would love to hear from anyone who has memorabilia, diaries or journals, or relatives who have shared memories about Lincoln Ladies Football Team between 1914 to the 1920s. He would also like to hear from female footballers playing today. Contact Stephen at this link