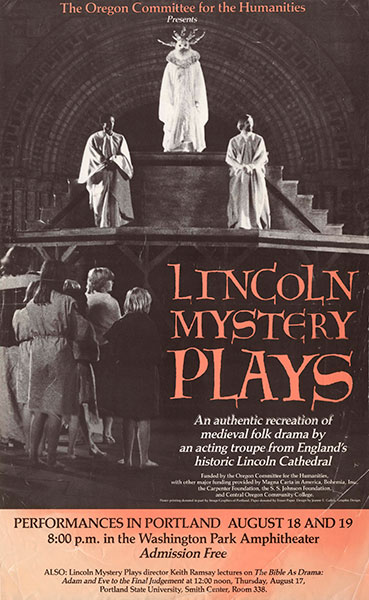 …their two-week American tour included performances, in front of up to 7000 people a night in huge amphitheatres, stadiums and parks on the West Coast.
“The reception was fantastic and audiences on some occasions were so quiet and absorbed that there were times when I wondered whether there was anyone out there,” said Mystery Plays director Keith Ramsay.
Keith, who is head of drama at Bishop Grosseteste College, Lincoln, and a leading authority on medieval drama, stayed in America for a few days after the resxt of the group returned to visit a long-time friend, the daughter of Alfred Hitchcock.
The Lincoln production enjoyed wide press and radio coverage, and a major article in the Wall Street Journal described Keith as “the British director we’ve all been waiting for.”
Included among the professionals in the cast was Colin McFarlane of North Hykeham who played the contrasting roles of Jesus and Satan.
Lincolnshire Echo

“I certainly enjoyed the production very much; the plays were artfully staged, acted with great meaning and sinceriry and created a very deep impression on me.”
Robert Cohen, Chair of Drama, University of Califorina

‘The grand-scale drama of good and evil’
Oregonian

Adoration of the Shepherds